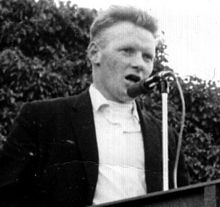 This evening it is being reported that Sean Garland has passed away. Garland was one of the key figures on the left of the republican movement. He was a key figure in the split that followed the upheavals of the summer of 1969, but perhaps not in the way that many people might think.

Despite the subsequent portrayal of the 1969 divisions within the I.R.A. as being rooted in a dispute over left wing politics, at the time the very pointed issues that caused so much internal dissension were the disarming of the Belfast I.R.A. and the control being exercised by Cathal Goulding. This all came to a head in a famous meeting at the end of September 1969. The Belfast O/C, Billy McMillen had been interned since before the intensification of violence in mid-August and his release was the pretext for him meeting the Belfast Battalion staff to seek confirmation that he would continue in the role (as Belfast O/C).

In McMillen’s absence, circumstances in Belfast had changed dramatically. As many former I.R.A. volunteers had returned to active duty, some of those arrived at the meeting, including Billy McKee and John Kelly to update McMillen on events.

McKee and Kelly “…outlined the concerns of the Belfast units and put three proposals to McMillan. The first was that they asked for co-options onto the Battalion staff for the likes of McKee, Leo Martin, Seamus Twomey and Sean McNally (six co-options were made in the end).

The second was that Belfast was to break with G.H.Q. until it acknowledged its responsibility for the failures of August. In that regard, it wanted four named members – Cathal Goulding, Mick Ryan, Roy Johnston and Seamus Costello – to step down and be replaced. The proposed replacement for Goulding was Sean Garland.[i] Garland had overseen the development of the plan for a northern campaign that had been captured by the Gardaí in May 1966. As he was known to be a committed Marxist this seems to further indicate that left wing politics was simply not a factor in the issues between Belfast and Dublin.[For instance, Kelly had spent a number of years in prison with Garland in the early 1960s]

McMillan accepted the first and extended the Battalion staff accordingly and, on the second point, agreed to break with G.H.Q. and the Army Council for three months to allow the necessary changes to happen.

McMillan notes a third issue that was agreed but has generally been overlooked – a demand that the money donated to the Northern Defence Fund for the purchase of arms was to be spent on arms. Goulding was already known to be diverting this it into his political projects (supposedly he insisted that the first £10,000 raised would go to fund political activity).[ii]

Having discussed and agreed the various points, the meeting broke up.”

That account is taken from the new Belfast Battalion book which (almost literally) ends at that point.

As McMillan advised the Chief of Staff, Cathal Goulding via Sean MacStiofáin, that evening, the Belfast Battalion split from G.H.Q. in Dublin.