Tonight TG4 is screening a documentary about Frank Stagg in the Finné series. The programme will look at the events that followed Stagg’s death on hunger strike on 12th February 1976. His brother George will tell the story of how Frank’s remains were seized by the Irish government in an attempt to prevent him receiving a republican funeral.

Stagg had been arrested in England in April 1973, charged with conspiracy to carry out bombing attacks and given a ten year sentence. Moved around various prisons, in March 1974 he and Michael Gaughan joined Gerry Kelly, Hugh Feeney, Paul Holmes, Dolours Price and Marion Price on hunger strike in protest at the refusal to grant them political status including setting a date at which they would be moved to prisons in the north (such movements, in either direction, were being routinely facilitated for non-republicans). 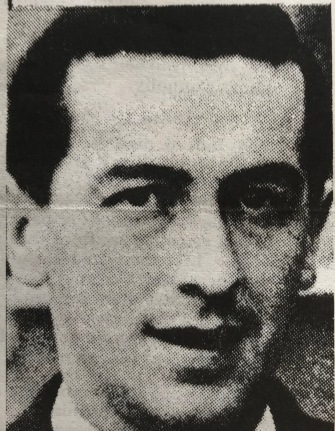 Like the others, Stagg was subjected to force feeding during his hunger strike. Force feeding was believed to be a factor in Michael Gaughan’s death on 3rd June 1974.  While the others were moved to prisons in Ireland after Gaughan’s death, Stagg was moved to Long Lartin then Wakefield. He and his family claimed they were subjected to humiliating body searches prior to visits there and he spent much of the time in solitary confinement, as did many other republican prisoners. He participated in a number of further hunger strikes and was again subjected to force feeding. His last hunger strike  began on 14th December 1975 along with others like Gerry Mealy.

Force feeding of prisoners is described in various accounts. In the past Thomas Ashe and Terence MacSwiney had both been subject to force-feeding while on hunger-strike and it had contributed to their deaths. It had been introduced, and used, by the prison authorities during the hunger strikes by imprisoned suffragettes from 1909 to 1914. Afterwards, prison regulations in England appear to have permitted or directed the authorities to forcibly feed a prisoner from the sixth day of a hunger strike. Conor MacNessa, who led an IRA hunger strike in Parkhurst in 1940, states that this was the regulation in force at the time and gives an account of the impact force feeding had on Joe Malone (from Belfast). MacNessa states that the injuries sustained by Malone were left untreated by the prison authorities and ultimately led to his death the next year. In 1946, the prison authorities in Belfast force fed David Fleming when he was on hunger strike (Fleming’s case disproves the claim that force feeding was not used here after 1917).

Clamp used in force feeding (drawn based on recollection Conor MacNessa, An Phoblacht, 17th May 1974)

The edition of Republican News published on 10th January 1976 carried an account of force feeding in it’s ‘Brownie’ column, based on information supplied by Gerry Kelly and Hugh Feeney.

If, as is likely, Frank Staff is force fed again he will suffer the following torture and, because his throat and stomach in particular cannot have healed properly, his health will deteriorate more quickly than it is doing at present.

He will face the possibility of at least one and maybe two ‘feedings’ daily. Force feeding is always brutal. No matter how often it occurs the victim does not get used to it. Some sessions are worse than others, but all are terrible experiences. If the ‘feedings’ are not at regular times each day, and usually they are not, then he spends his entire day trying to prepare himself emotionally. Trying to re-stock his determination to fight.

A team of screws are the first to appear. They come into the cell with varying expressions on their faces. These range from snarls, through impassive indifference to the odd sheepish apologetic smile. He will be ‘fed’ either in his cell or dragged outside into another one. He will be held in a bed or on a chair. Usually six or eight screws are involved. They swoop in an obviously planned manner, holding and pressing down on arms and legs. He will struggle as best he can even though he knows it is useless. One grabs him by the hair and forces his head back, and when he is finally pinned down in the proper manner the doctor and his assistant arrive.

Various methods will be employed to open Frank’s mouth. His nose will be covered to cut off air, or a screw or doctor will bunch their fists and bore their knuckles into the joints on each side of the jaws. A Ryle’s tube will be used. This is a very long thin tube which is pushed through the nose. It is supposedly for nasal feeding, but, in forced feedings it is simply a torture weapon used to force open the jaws. It rubs against the membrane at the back of the nose and, if not coated in a lubricant (which it seldom is), it causes a searing pain, akin to a red hot needle being pushed into one’s head.

If Frank cries out with this pain, a wooden clamp will immediately be pushed very forcibly between his teeth. If this fails to work, the doctor will use a large pair of forceps to cut into the gums, the ensuing pain again forcing the jaws to open sufficiently for the clamp to be forced in. Sometimes a metal clamp, rather like a bulldog clip, is used. It is forced between the teeth and a bolt is turned, forcing a spring and the jaws to open.

When Frank’s jaws are finally pried open, a wooden bit, rather like a horse bit, is forced into his mouth. This bit has two pointed ends which are used to force and to hold an opening. It ‘sits’ across his mouth with a screw holding each end, and there is a hole in the centre of it through which the feeding tube is forced. A flat piece of wood is inserted first to press the tongue down and then a three foot long rubber tube, coated in liquid paraffin, is shoved in and down his throat. A funnel is place on the open end and the will pour some water in. If the water bubbles, they know they tube is in Frank’s lungs. If so, the tube is removed and the whole process starts again.

Michael Gaughan was murdered in this way. When the tube is eventually fixed properly, it is pushed down into Frank’s stomach. There are different widths of tube and obviously the wider they are, the more painful the torture. Doctor’s usually use the widest as food goes down quicker and they don’t have to delay overlong. Frank will feel his stomach filling up and stretching, an experience has undergone before. Automatically he will vomit up, the disgorged food being caught in a kidney dish. If the doctor in charge is especially sadistic the vomit will be forced back down his throat again (this happened to Gerry Kelly). As the tube is removed it tears at the back of the throat, more so than before because the liquid paraffin has worn off on the way down. The last few inches will be ghastly.

Frank will get violent pains in his chest. He will choke, and, at this point, he will be sicker than before, as the tube coming out triggers more retching (Marion Price passed out at this stage once). After ‘feeding’ Frank will find it impossible to stand up, to sit up, or to move in any way.

You can watch the documentary on Frank Stagg on TG4 at 9.30 pm tonight.