Usually I don’t cover the post-1970 period directly, but here is some early 1970s Christmas items from Republican News. The articles include a two page spread on Long Kesh naming many of those interned at Christmas 1974, a number of front covers, messages from individual battalions of the Belfast Brigade and even a piece supporting freedom for Cornwall.

1974 Centre pages, including names of internees in each Cage in Long Kesh.

1973 Messages from each battalion of the Belfast Brigade 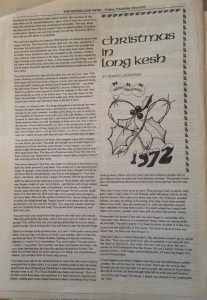 1972 And a piece on Cornish freedom in the Christmas issue.