Border propaganda isn’t exactly new in Ireland. Here’s some century old invective from the Illustrated London News. The Unionist government was suffering considerable bad publicity from the violence being inflicted on nationalists in Belfast in particular in early 1922. The Weaver Street bombing in February 1922 had drawn Churchill’s ire and the McMahon murders in March had drawn universal condemnation. Moreover, the atmosphere was poisoned by the inherent contradiction in Unionists simultaneously demanding that they be exempt from home rule in Ireland, while insisting that areas which had explicitly supported independence be refused the same. This was in forefront of Churchill’s mind when he made his ‘dreary steeples’ comment in the House of Commons in February 1922 in the aftermath of the Weaver Street bomb. Oddly the ‘dreary steeples’ quote has become a cliché for a sort of generalised ‘sectarianism’ when Churchill was specifically addressing what he saw as the flawed logic being used by Unionists. Amidst the usual parliamentary flourishes, Churchill actually states that “…Fermanagh and Tyrone… may be districts in which—I am not pre-judging—the majority of the inhabitants will prefer to join the Irish Free State” (Hansard, 16th February 1922). Perhaps it is time people actually engaged with the context of that quote.

In this light, the Unionists mobilised friends among the Conservatives and hosted the Punch cartoonist Leonard Raven Hill around the 20th-22nd March 1922. Raven Hill was an overt supporter of the Conservatives and British imperialism. He drew sketches and produced notes that were published in London Illustrated News on 1st April 1922. His article had added importance for the Unionists in the wave of revulsion that followed the McMahon murders on 24th March and the subsequent allegations of official involvement in the killings.

The London Illustrated News article tries to counter Churchill’s dreary steeples argument by depicting the six county boundary as the dividing line between Unionists and Irish nationalist and presenting nationalist interest in the north as being imposed by Irish nationalists in the twenty-six area. This includes a signed sketch from James Craig (the Northern Ireland Prime Minister), helpfully annotated to show the areas ‘claimed by the South’ (below). This is part of the process by which it was intended to counter Churchill’s criticism by trying to get the public to solely associate ‘Ulster’ with ‘Protestantism’ and ‘Unionism’ and present Irish nationalism as somehow alien. Obviously identity politics is not a recent phenomenon.

The rest of the article, ‘Our Special Artist in Ulster‘, tries to counter the increasingly bad publicity (presumably the McMahon murders happened as the article was being prepared for the press). It pushes a number of key messages. Presumably intending to echo Great War propaganda, Raven Hill (he quotes one as saying “The women of England never had to go through what we are going through…”) and presents a number of stereotypes which, to some extent, persisted into later and contemporary unionist political mythology.

Raven Hill paints a scene populated with what are now familiar political stereotypes from the last one hundred years.

There is the female refugee from the South.

The brave wife of an embattled Ulster farmer.

By ‘Ulster’, of course, we are supposed to understand ‘Protestant’ and ‘Unionist’ and to solely associate ‘Ulster’ with these terms. These figures are accompanied by the ‘loyalist’ farmer. 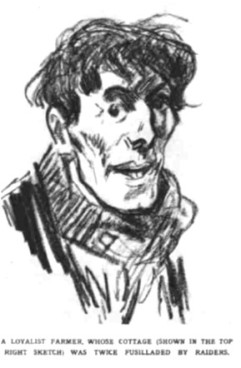 They live in a lonely cottage which is constantly under fire from raiders who cross from the ‘South’ into ‘Ulster’.

And there is also a ‘fine type’ of Ulster farmer, an over sixty who uses his spare time to guard bridges. This is presumably intended as an archetype to represent a Special Constable. An Ulster Special Constabulary was set up in the north to perform the same reprisal and counter-insurgency functions as the other Special Constabularies, the Black and Tans and Auxiliaries, carried out elsewhere in Ireland.

As a contrast, two IRA men are depicted. Notably IRA men are represented as crossing the border, rather than being from within the six county boundary area. As if the caricature wasn’t cartoonish enough, one is described as the son of a Maltese.

All of these characters then populate Raven Hill’s main storyline which is an effective justification for cratering and blocking border roads. It begins with an IRA incursion into ‘Ulster’ from the south, allowing raiding parties to fire on the lonely cottages of the doughty farmers and their families as shown above. The County Commandant and Special Constables decide to blow up the local bridge. Raven Hill provides sketches of this being done (see below). 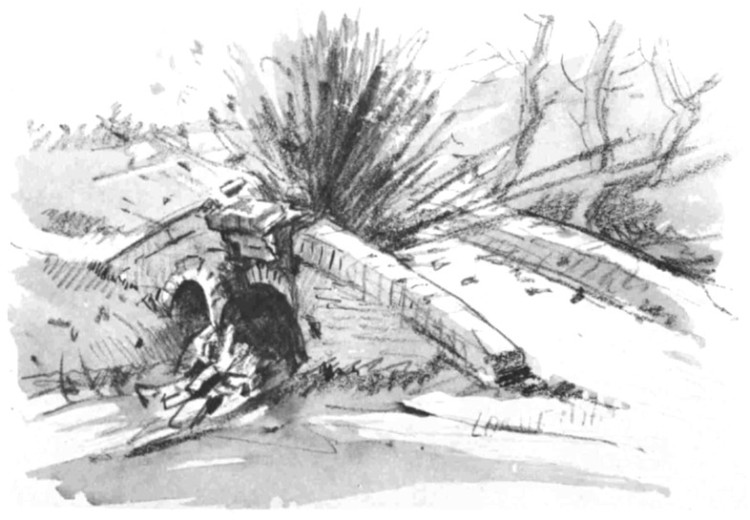 Raven Hill also includes a number of images showing different ways that the border roads were closed off or blocked up. This includes:

A trench dug across to block the road. 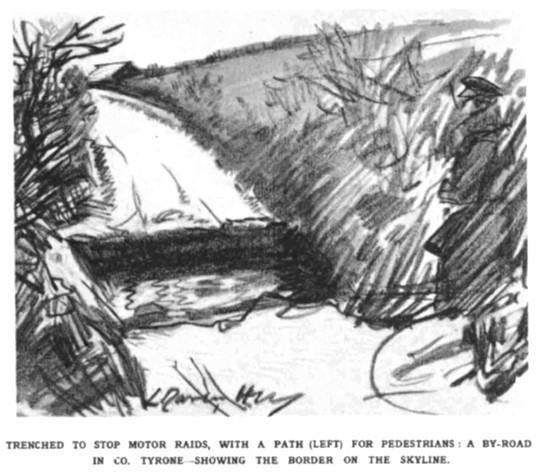 A destroyed bridge reduced to a narrow walkway for pedestrians.

I’ll finish up with this one. What Raven Hill depicts as the ‘last outpost of Ulster on the Dublin Road’ guarded by armed Special Constables who appear to have felled a tree to block the road. I am guessing that, again, the ‘last outpost’ is meant to have deep emotional resonances and be evocative of the great war and, in particular, the western front. These sketches appeared in the Illustrated London News on 1st April in 1922 and, at the time, were largely to counter the increasingly negative publicity the Unionists were attracting for the deployment of violence within the six county area, and, the logical inconsistencies in their rationale for demanding the type of hegemony over districts (the dreary steeples of Fermanagh and Tyrone) which they insisted they themselves could not live under. The messaging used by Raven Hill, and some of the stereotypes, have been perpetuated and became almost fixed points in the subsequent political landscape (so much so that they are still used today).