Here are a couple of photos I found recently. The first is of an arms dump being displayed for the cameras by the RUC. The dump was captured in Currie Street on 19th September 1924 in a hall known locally as the ‘Currie Institute’. A group of men arrested in the hall appear to be the members of the local IRA company. More of the story is told here.

The photo was published during the following week in the Belfast Telegraph. The format, with police officers posing with the captured arms on display, is relatively unusual for the 1920s or 1930s, certainly in an Irish context. The find included twenty-four service rifles and a Thompson submachine gun (probably the gun set slightly in front with its stock at a right angle to the others). 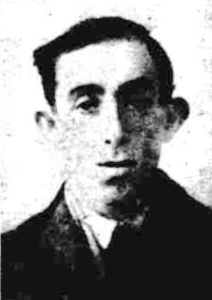 The second photo, above, is Patrick Woods. He was shot dead by the IRA on 19th November 1925 and his photo published a couple of days later in the Belfast Telegraph. Woods had given evidence over IRA activity in court and had been involved in moving the weapons to Currie Street in his taxi the previous year (see link above). Again, at the time, it was unusual to see published portrait photographs of individuals other than major figures in politics, sport and entertainment. Although fatalities involving the IRA were rare after the mid-1920s and into the 1930s, violent deaths during 1920-22 were common although it was also very unusual, then, to see published portraits of the dead.

Woods’ death provided the Unionist government with a pretext for the mass round up of the Belfast IRA, many of whom were interned for several months in one of those episodic internments between 1922 and 1969 that are often overlooked. After the arrests, with the Belfast IRA leadership mostly interned, the failure of the Boundary Commission to end partition was confirmed in public. The internees were not released until the end of January 1926.

(You can read more about all of these in Belfast Battalion).